My favourite CIP (insurance courses) instructor, Melanie, was due to have her first baby (note: since I made contact with her last, she was having her baby!).  I wanted to ship her a box of cookies to celebrate (she ate them before the baby was born, so I guess he had a taste of them, too). 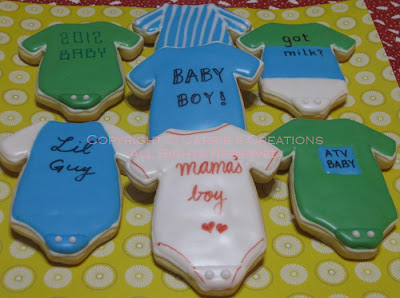 Little boy onesies for a really lucky baby!  Mel is into ATVs and such, and I would not be surprised if he rode on that before a tryke.  Oh, the poor Mennonite neighbours! :)

My friend, Yahaira, wanted to practice making a cake for her son's upcoming birthday, so we made a cake for her friend's birthday, as a test.  This was also a test for me, because I haven't taught anyone how to decorate anything before.

He was into drama, so we made that our theme.  We made marshmallow fondant (it was giving our hands a workout!) to cover the chocolate cake (not homemade but the vanilla filling was).  Luckily, she had gloves so we didn't get red or blue stained on our hands when we coloured the fondant! 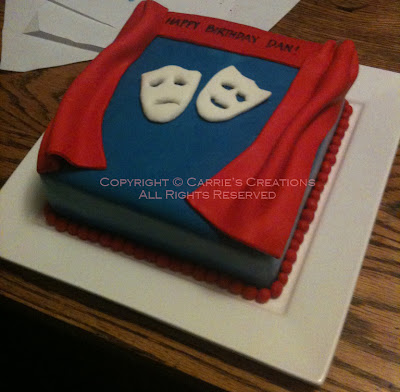 Pretty good work for a beginner, eh?  Hopefully, the birthday boy appreciated the effort!  I am proud of my students' (her husband helped out, too) work!
Happy Birthday, Dan!
* * * 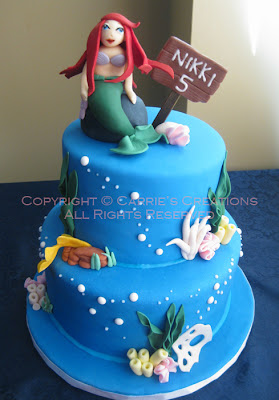 Big girl Nikki turned 5, and she loves the Little Mermaid.  Now, this is my first Ariel cake, so I had a few challenges... one being working with the gumpaste!  It didn't want to harden, so I don't know what's up with that.  Gumpaste is supposed to dry faster than fondant, so how come it didn't work for me?  Oh well.

The chocolate cake was filled with pink vanilla Swiss meringue buttercream and covered in blue fondant.  I added ocean details as finishing touches.  The brown sign is made with chocolate fondant.

I made a second sheet cake, because there were a lot of guests.  It was decorated with flowers, lettering and buttercream. 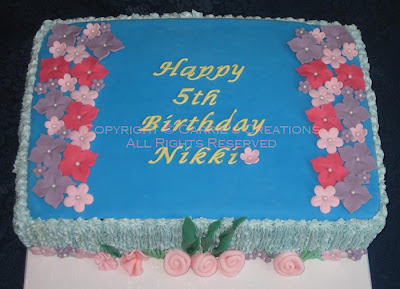 Sorry, don't have pics of this one... I had to make it twice because I forgot the add sugar the first time (don't ask how I missed it!).  This was for a playdate lunch, so I cut out pieces with a heart-shaped cookie cutter, then piped a heart with the icing.  It was so yummy!  I will make this recipe again, and I'll do the same design so I can post up the image.

The following two items were for a bake sale at work to help raise money for the United Way: 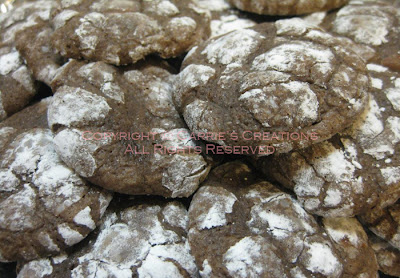 A new recipe... had to use 1/2 tablespoon scoops because 1 tablespoon-sized made the cookies spread horrifically.  The smaller size made the cookies bake evenly and enticed those who would've refused a larger cookie (due to diet).  What a mess I made when rolling the cookie balls into icing sugar! :/ 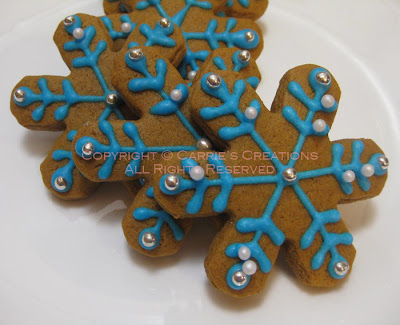 A classic, just in time for the holidays!  I changed it up by having a darker blue tint for the royal icing, as well as adding silver dragees and random pearls throughout.  These, I packaged then tied with blue curling ribbon, as I thought it would be great to save for later or for a loved one.
Posted by Carrie Young (www.carriescreations.ca) at 11:32 PM No comments: 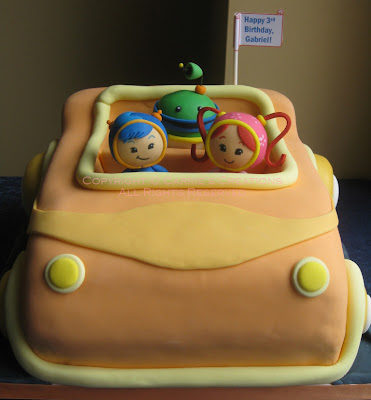 This cake is making it's third appearance on this blog for 3-year-old Gabriel!  It is comprised of 2 layers vanilla and 1 layer chocolate cake and vanilla Swiss meringue buttercream.  And dark chocolate ganache before the fondant covering, of course.  It also survived the rainy weather the day of delivery. 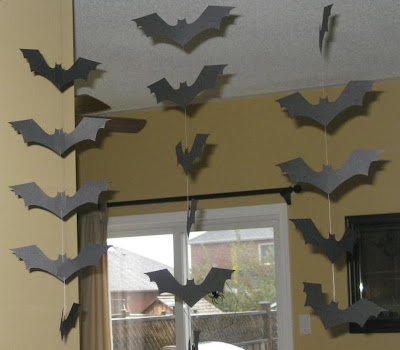 This was the year that they would be old enough to appreciate it!  Having made a few friends in the East, we had a total of 11 kids.  No haunted house, though, because I thought they were still too young.  Maybe next year. 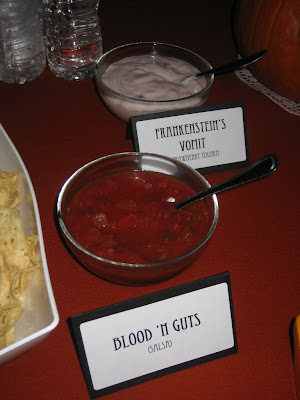 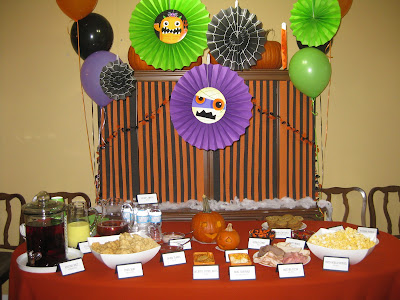 I had activities planned, but it was too rainy for an scavenger hunt in the backyard (my minimalistic house made it hard to hide things indoors).  Instead, we played musical chairs (where the adults had to play first to garner some interest with the kiddies), we passed a chick for the "Hot Potato" game, and attempted to have a dancing party (no one took the bait... the majority were boys, so I guess the plan failed before it began).  Other than that, the boys William's age were running around the house. 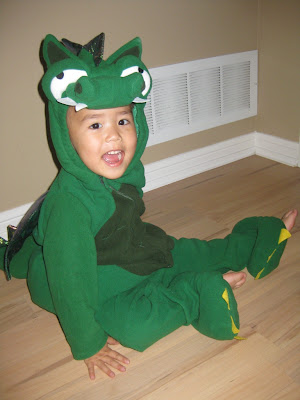 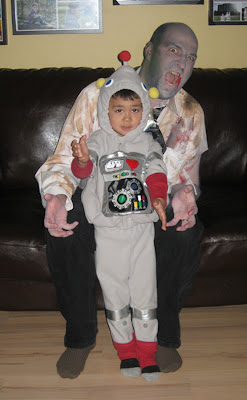 There were a few superheroes at the party.  3 princesses also attended.  William was a robot and Owen was a dragon.  James was a zombie (again) and I was a mime (that broke the golden rule of silence). 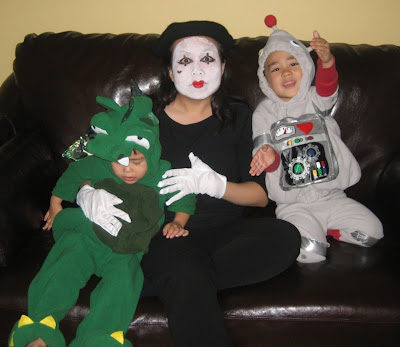 The party was 10am to 12pm.  Who thinks it's crazy to have a kid's party that early on a Saturday?  Yes?  Then, join James, 'cuz he thought I was nuts. 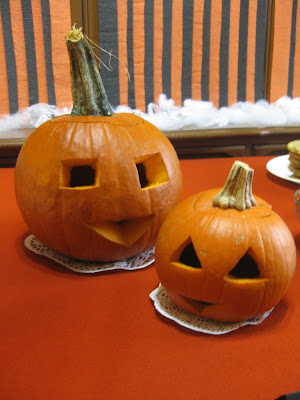 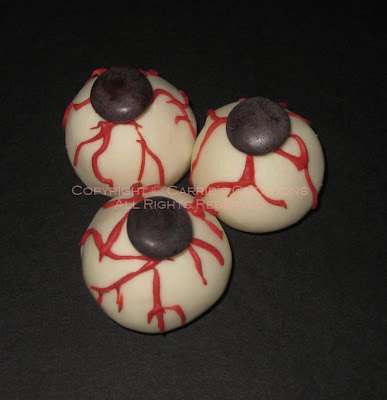 Mixed with vanilla Swiss meringue buttercream, I dipped it in white chocolate wafers, then painted on the blood vessels and topped with a black Smartie.  I brought these to a kid's Halloween party the next day, and a lot of kids didn't want to touch them at all.  I guess it looked more realistic in unjaded eyes. 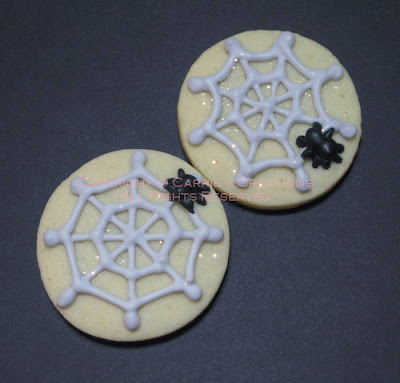 I did it again.  For each house that we visited on our trick-or-treating rounds, I gave out one or two of these cookies.  Just plain sugar cookies, with royal icing web and spider.  Sprinkled with disco dust.  Many people were surprised at receiving something in return after handing out candy! :)


Happy Halloween!
Posted by Carrie Young (www.carriescreations.ca) at 8:51 AM No comments: