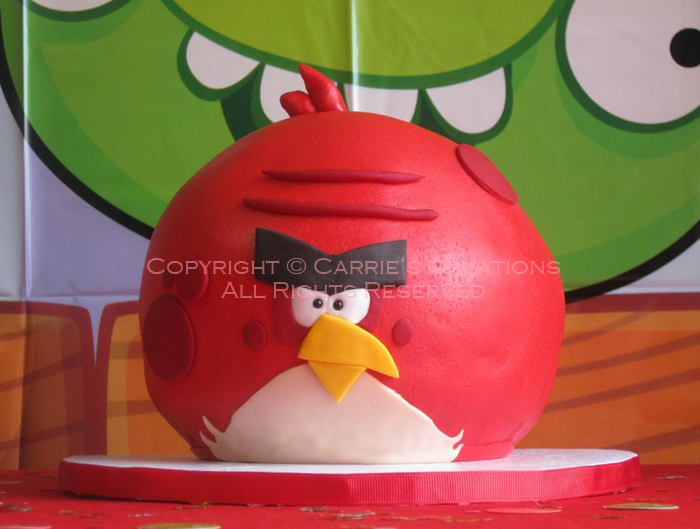 Originally, William wanted a Corvette cake based on one of his Hot Wheels cars.  Then, he was exposed to Angry Birds.  And he changed his mind.  But, instead of the regular red Angry Bird, he wanted the big fat red Angry Bird.  We questioned him on his decision, but he was certain that was the cake for him.

I must say I'm not a fan of ball/dome pans, because of the increased (uneven) baking times and its crustier outer part that touches the pan.  But I had to use it for this spherical cake.  My solution - carve out the majority of it.  This pan set had a inset pan, so I think because the portions are different and one was in another, my normally 50-minute baking time for the recipe took an extra 30 minutes.  So, yes, the cakes were overbaked, but it still tasted OK.  It was vanilla cake with vanilla Swiss meringue buttercream mixed with strawberry and milk chocolate crispearls.  Dark chocolate ganache coated the cake before topping with the strawberry-flavoured red marshmallow fondant I made (haven't done so in a while). 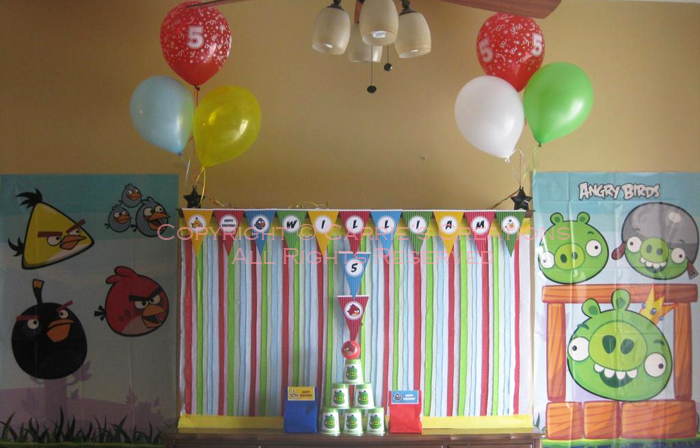 I bought wall decorations and balloons to match the theme.  The bunting was from a free printable template, and I customized the text.  The crepe streamers took the longest time to put together yet it was a great way to cover up my dining hutch.

Time got the best of me, so we ended up with three activities.  We played "Knock the Piggies Down."  Plastic green cups had the green pigs taped on and stacked like a pyramid and the red Angry Bird was taped on a red ball.  The kids played this game for a while.  Such a simple concept yet it worked. 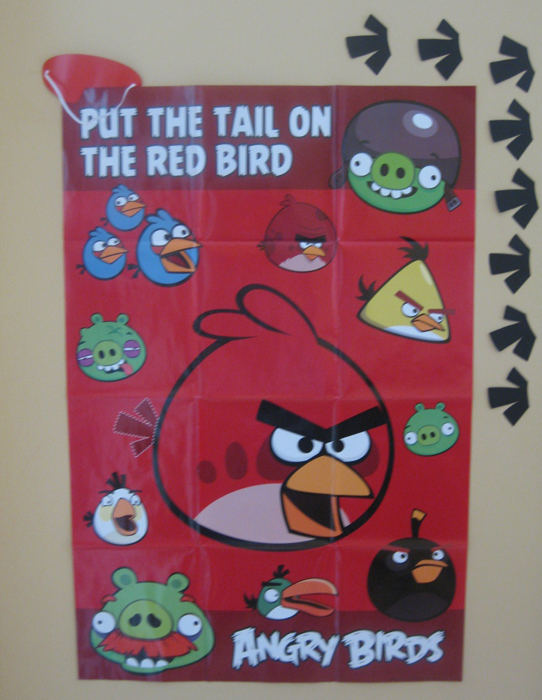 Next game was "Put the Tail on the Red Bird," and I had my friend Solmaz cut out the tails from black cardstock because the ones that came with the game were stickers, which was too permanent for me.  I put double-sided reusable tape on each one for ease of use.  The game resulted in some kids walking into the wall, but they still enjoyed themselves. 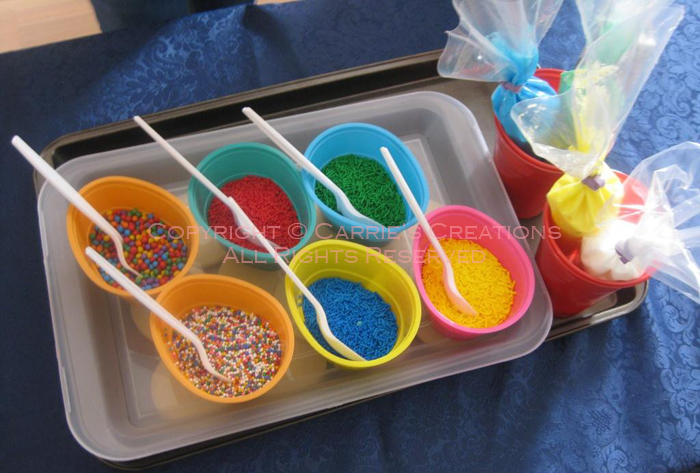 The last activity was a cookie decorating station.  I made two dozen sugar cookies and coloured the royal icing.  Of course, I was expecting a mess!  At least the sprinkles were jimmies and bigger kinds, rather than coloured sanding sugar.  The kids did love creating their own cookies. 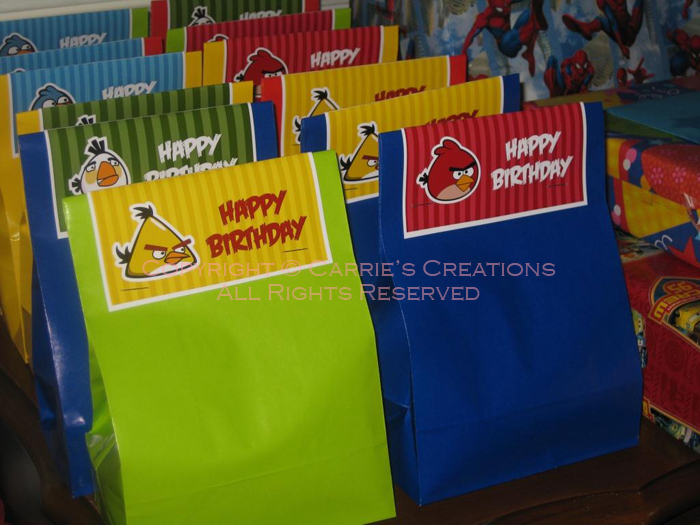 For the favours, I got coloured bags that matched the theme and just added some candies and treats, Angry Birds flying shooter discs and tattoos.  I stapled a free printable template that was printed on photo paper.  Originally, I wanted to only make cookie favours, but I thought the cookie station was better.  So, the tags were repurposed. :)

A special shout out to Yahaira and Solmaz for helping me out with the party... you gals rock!  What awesome friends!  :D 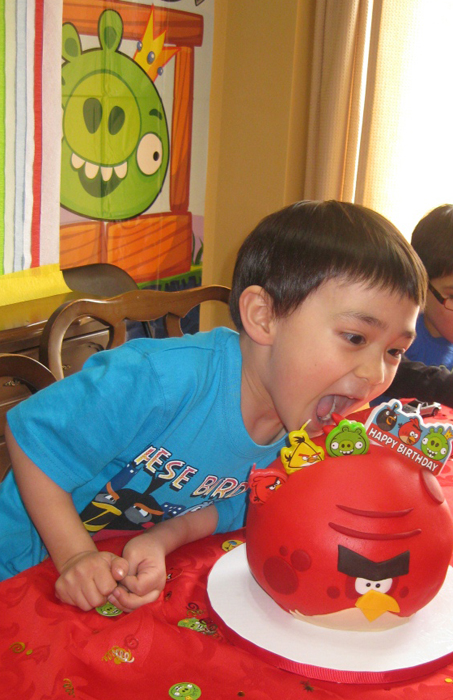 Here's a recap of my month plus one from today: 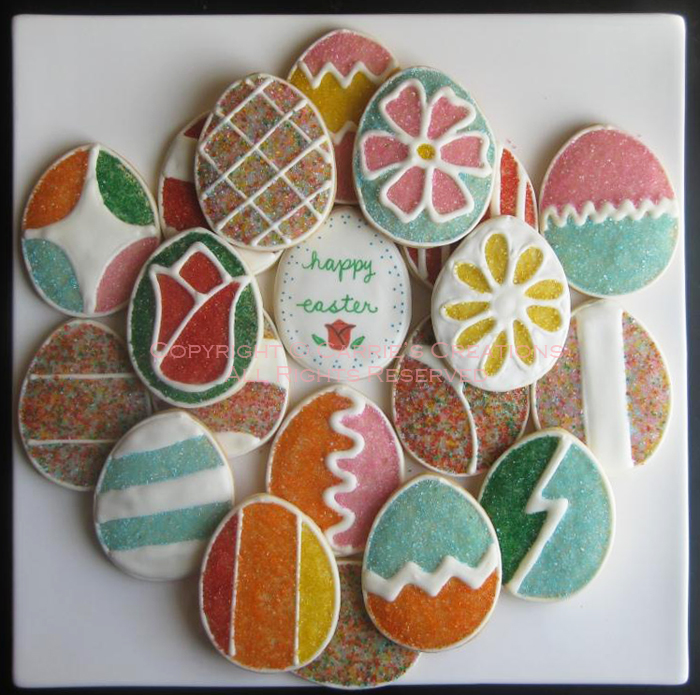 I have a co-worker that really loves my cookies, whether it be gingerbread or sugar.  This time, she wanted sugar cookies in egg shapes.  Unfortunately for me, I do not have an egg cutter besides a really big one.  So, I took a normal circle cutter and bent it into an egg shape.  I mourned the loss of the original roundness but I didn't want to waste time to buy another cutter.

Then, it was just a matter to piping some royal icing as outlines or whatnot.  To get the sprinkles to stay on the cookie, I applied a thin layer of corn syrup, and waited for it to dry. 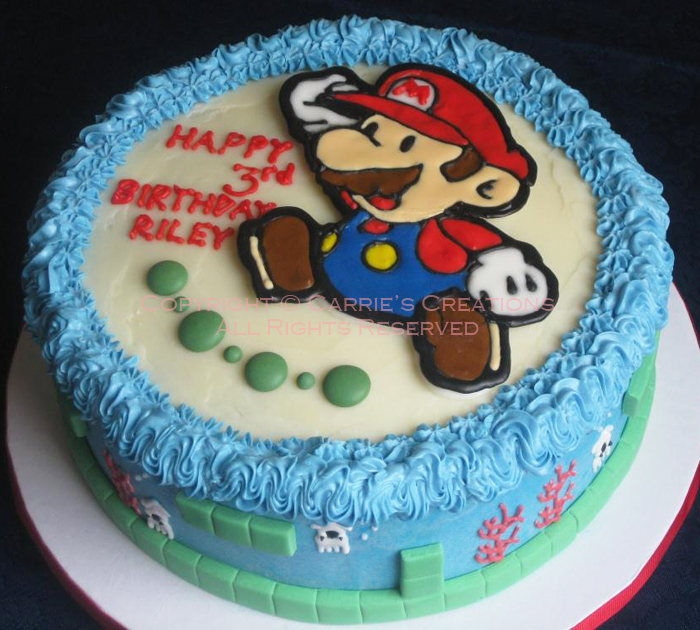 I remember making cookies for Riley when he turned 1... now he's 3!  Where did the years go?!  He's really into Super Mario anything, so it was also his cake of choice.  His mom told me that the kids do not like fondant at all (bad experiences).  Instead, the chocolate cake had vanilla Swiss meringue buttercream filling and sides, and white chocolate ganache on the top.  Mario was actually a royal icing transfer, as were the dots, squids and coral.  The green blocks had to be made of fondant but they can be easily removed prior to eating. 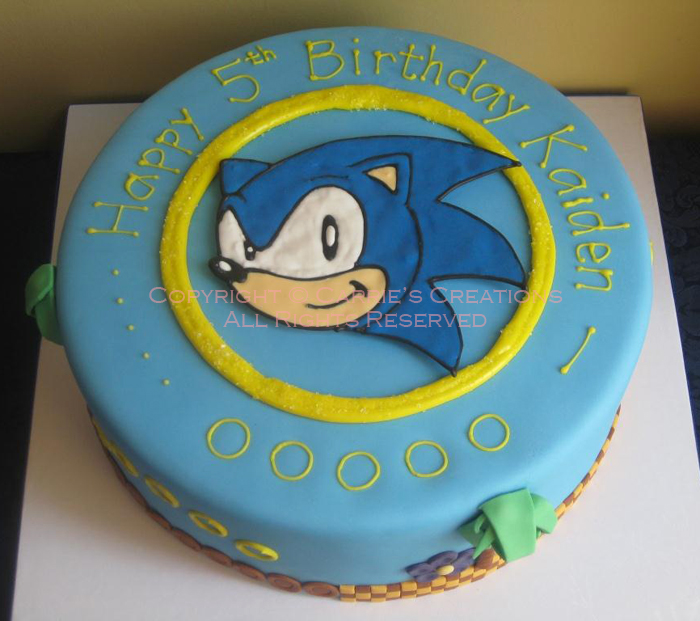 Originally, Kaiden wanted a Wolverine cake.  Then I was told he had changed his mind and wanted a Sonic cake instead.  The design is loosely based on what my friend had submitted.  I decided to make a royal icing transfer of Sonic's head in a ring. 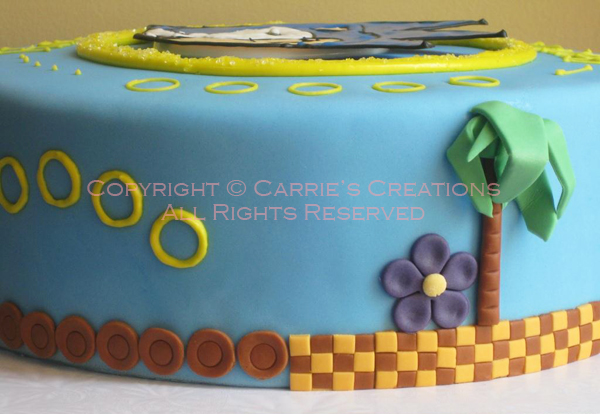 The cake was vanilla with vanilla Swiss meringue buttercream.  The whole thing was covered in blue fondant, and fondant and royal icing details.  I am super proud of the yellow and brown checks... those took the longest to make! 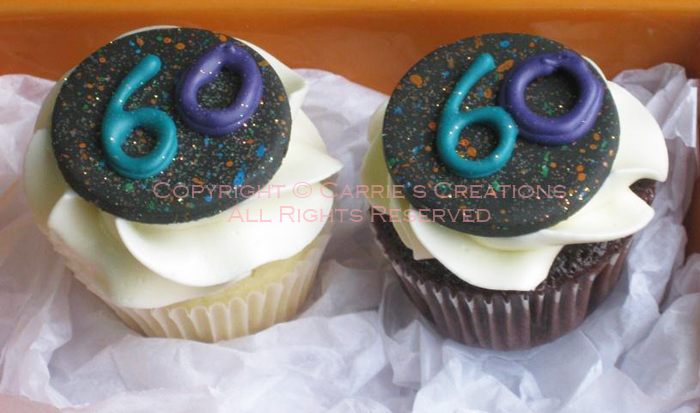 These chocolate and vanilla mini cupcakes with vanilla Swiss meringue buttercream were for a 60-year-old.  The topper design was based on the actual decorations they had for the party.  The black fondant circles were splattered with orange, blue and green colours.  Then, I piped teal and purple royal icing on top.  For the final touch, I sprinkled disco dust all over them.


Happy 60th Birthday!
Posted by Carrie Young (www.carriescreations.ca) at 11:59 AM No comments: