I had a request for Mickey Mouse cookies for a cute little one-year-old's birthday.  The theme was red, blue and Mickey, of course.

I wanted to try my hand at (thinned) royal icing transfers because:
a) they are true to characters' likenesses; and
b) they can be made in advance since spoilage is not an issue (if they're kept out of light and moisture, that is).

There were several versions of Mickey (since some batches had one broken head or I wasn't happy with the result).  In the end, one batch had 11/12 survivors and I had to add one more from another batch.  The "1" and "Riley" mimicked Mickey Mouse's font.  All the transfers were placed on still-wet flooded sugar cookies so it would stick. 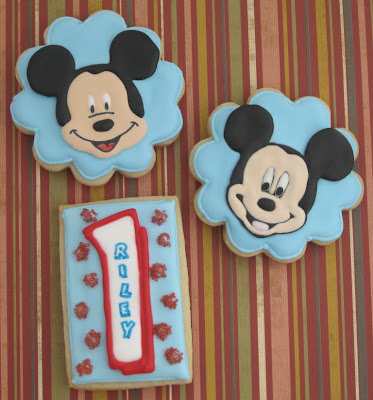 
What I learned during this process:
- Next time, use parchment paper instead of waxed paper; when the thinned icing was put on wax, there was movement (notice how Left Mickey's eyes are so much smaller than Right Mickey's).
- It is possible that my equipment had traces of grease (even though my mixer bowl has been in the dishwasher; my mixer paddle, has to be handwashed, though) which caused my royal icing not to be as strong as it could be; so, vigorous scrubbing before making royal icing!
- I used parchment piping bags without tips and had issues with breakdown of the paper at the opening; I guess the solution is to buy more tips with finer openings instead of cutting a tiny hole at the tip. :/
- Using edible markers was easy but that dark bit where you stop the ink, how do you get rid of it?!  It doesn't look good to me, and it's more obvious when a big space is filled in with it. :(

Through trial and error, I managed to produced some presentable cookies.  They were well-received and that's all that matters!